Honey bees mate only in flight, five to sixty meters high, a practice that has made studying this area of reproduction challenging. In the spring and summer months on calm, clear, warm afternoons, drones leave the hive and fly to places called drone congregation areas (DCAs) where drones from different colonies meet and fly around looking for queens with which to mate. DCAs are small areas, with diameters between 30 and 200 meters.1 After flying for about a half an hour, drones return home to refuel with honey, and then head back out and repeat the process as long as conditions are favorable for flight. Drones prefer DCAs close to home. The paths drones take to and from DCAs are called flyways. Flyways are narrow areas (50-100 meters) that connect the hive to the DCAs and connect DCAs to each other.2 Mating can also occur in flyways–so long as the bees are flying, they will mate. 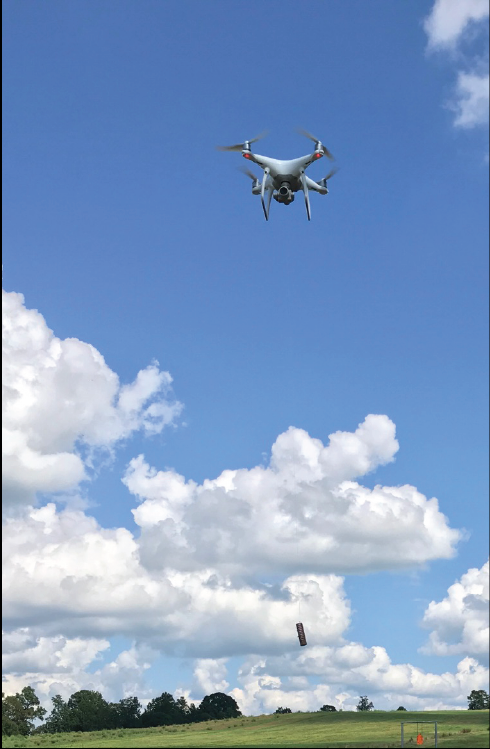 When thousands of drones are flying in a DCA, they flood the area with drone mandibular pheromone3, which attracts queens on their nuptial flights. When a queen enters a DCA, the drones are attracted to her pheromones and quickly begin a chase. They trail each other, their flight paths resembling long lines of drafting bicyclists, and form a comet of hundreds of drones. The first to reach her will mate. Copulation takes only seconds, during which the drone’s endophallus rips from his body and he falls to his death.4 His endophallus is left inside the queen’s sting chamber, but not for long as another drone will shortly follow.

It has long been thought that queens mate with around 12 drones but new studies show that the average number of matings is closer to 505. Multiple matings of queens is key to the health of the colony, as genetic diversity provides nuanced traits that will help the colony to thrive.6,7 A queen’s nuptial mating flights are completed in a day or two, after which she has enough semen (~5,000,000 sperm)8 stored in an organ called the spermatheca, to last her lifetime. A few days after her return, she commences her life’s work as an egg laying machine.

Drones live about 21-32 days, and are raised in times of plenty – in the spring when the nectar is flowing and in summer months when the colony can support them. If a colony falls on hard times – nectar dearth, drought, sustained poor weather – and they can’t spare food for drones, the workers will keep the drones from entering the hive, essentially starving them out. By the time fall rolls around, the honey bee colony expels any remaining drones because mating season is over, and their services are no longer needed. Colony survival in the winter months depends on conserving the colony’s stored honey, and drones are a drain on resources. Come spring, the colony will rear new drones.

Mysteriously, the new drones find the same DCAs year after year, even though no old drones survived the winter. Without intergenerational learning, how do drones know where the DCAs are?